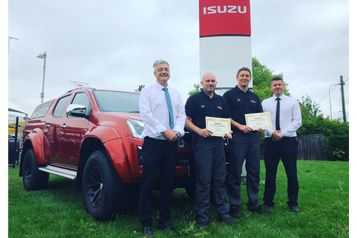 For the second consecutive year, the Suffolk based dealership entered Lee Cayley and Aaron Fenn into Isuzu’s World Technician competition. To qualify, they had to pass a written examination.

Having qualified for the British finals, they were both shortlisted amongst the top Isuzu technicians in the country.

The finals took place in July, where both Lee and Aaron competed at the IM Group headquarters in West Bromwich. What followed included an intense day of practical and written examinations starting at 8 in the morning finishing 4 in the afternoon.

Throughout the day, they were examined on both electrical and mechanical faults. Every assessment was analysed by two examiners and a photographer.

One of the practical exams included a non-starting vehicle; which had a different fault from the previous year. The technicians had an hour to diagnose, repair the vehicle using the correct procedure, and complete a written report.

Lee won the competition with Aaron taking a close third. Lee will now be going on to compete in the Isuzu World Technician Finals, which takes place in Thailand later this year.

Paul Marjoram, Dealer Principal, commented, “We are very proud of their achievements and wish Lee the best of luck in the world finals!”