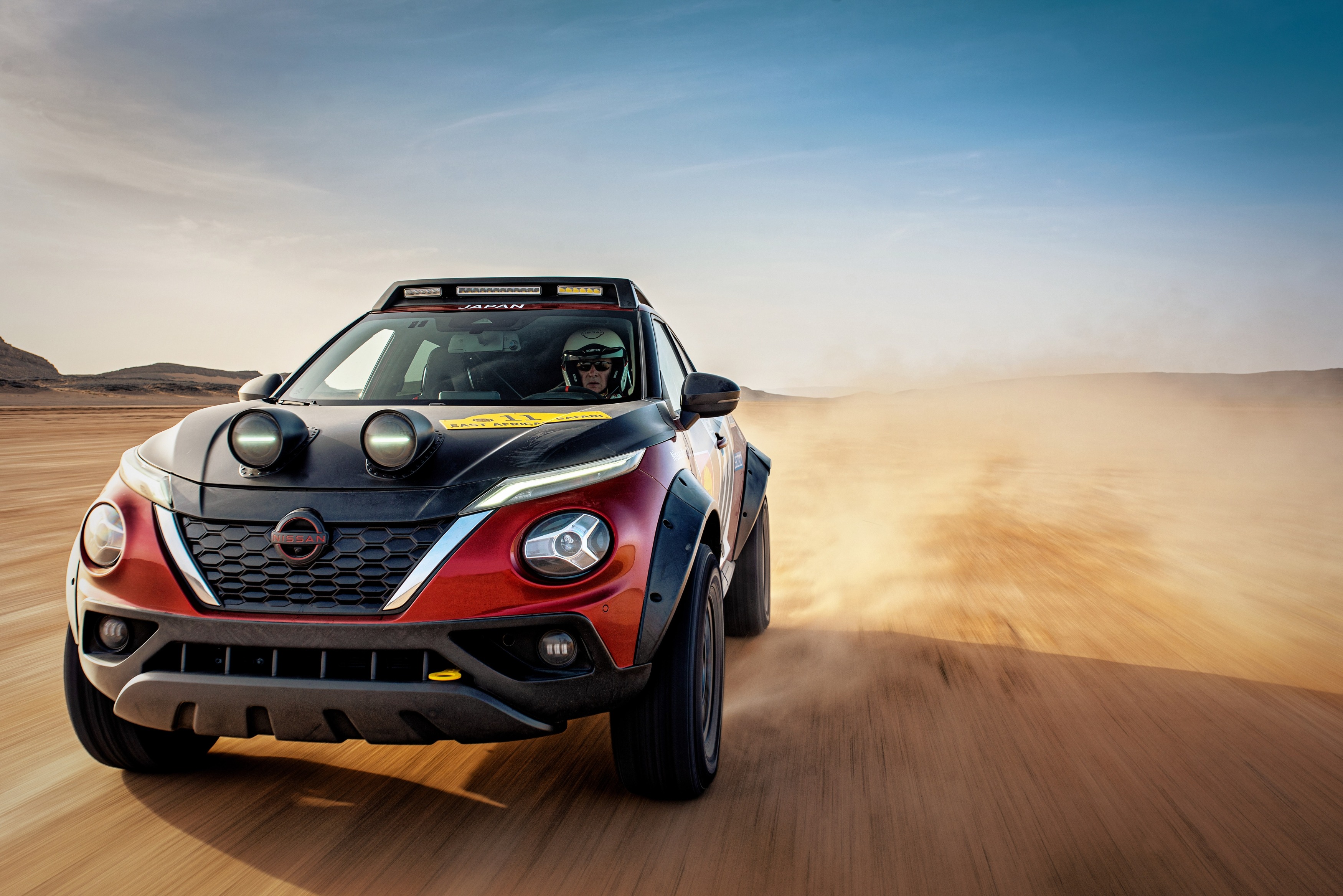 The JUKE Hybrid Rally Tribute moved from design sketch to fully operational one-off vehicle following the overwhelmingly positive reaction to the release of the original concept images. Its unveiling previews the European introduction of the JUKE Hybrid this summer. The prototype has the production version’s hybrid powertrain at its heart.

The use of powertrain from the forthcoming JUKE Hybrid reflects both the additional performance it offers in the production version, as well as the improvements to its efficiency and emissions.

On the electric side, the main electric motor produces 36kW (49hp) and 205Nm of torque, while there is a 15kW contribution from a high voltage starter/generator, all of which is fed by a 1.2kWh water-cooled battery. The net result is a powertrain providing 25% more power than the current petrol engine option, with a fuel consumption reduction of approximately 40% in the urban cycle, and up to 20% combined. (Figures subject to homologation.)Nissan JUKE Hybrid Rally Tribute: where hybrid meets adrenaline

Also carried over from the production version of the JUKE Hybrid and key to the driving pleasure at its heart is an advanced low friction multi-modal gearbox that provides optimal use of the propulsive power, whether electric, petrol engine, or both.

To reduce friction, this motorsport-inspired gearbox uses dog clutches instead of conventional synchroniser rings to shift the 4 “ICE” gears and 2 “EV” gears. Additionally, to reduce friction, this gearbox does not use a clutch. All vehicle starts are 100% electric, and the 2 EV motors are used in combination to synchronise the gears, delivering smooth, connected and responsive acceleration.

The gearbox is controlled by an advanced algorithm, managing the shift points, battery regeneration, as well as the advanced series-parallel architecture. The powertrain can seamlessly navigate through different hybridisation combinations (series, parallel, series-parallel) according to acceleration and power requirements and without any driver input.

Like the Gripz concept car that was presented at the 2015 Frankfurt motorshow, preceding the introduction of JUKE, it takes its design cues from the iconic 240Z that competed so successfully in the desert rally over half-a-century ago.

The most obvious modification are the enlarged wheel arches to accommodate the tailor-made off-road tyres, while the additional lights mounted on the hood and roof echo those of 50 years ago.

Similarly, the black hood and enlarged black wheels are a visual homage to the 1971 vehicle that competed in the East African Rally. The use of vintage sponsor logos and the number 11 also reflect aspects of the 240Z rally car, as do the additional of reinforced plates under the front and rear valances which offer protection to the vehicle’s underside. Reinforced and long-travel suspension has been fitted all-round, to give the Juke Hybrid Rally Tribute exceptional poise over the challenging terrain it will navigate. The tyres are 265/70 R16, giving phenomenal grip and traction in all conditions, in the most difficult conditions.

Inside, the interior has been modified with the fitment of a tubular cage to stiffen the bodyshell and to offer protection in the case of an incident at speed in the challenging desert environment. The rear seats have been removed to provide space for spare wheels and four-point harnesses have been added to secure the driver and navigator safely in their racing seats.

Other modifications to the interior include the fitment of a competition fire extinguisher, an intercom system with a pair of headphones to simplify communications between driver and navigator, the fitment of Alcantara trim on the steering wheel and a hydraulic handbrake with high-reach handle for quick and easy activation.

“As part of our commitment to electrify our range, this year will see an unprecedented wave of new Nissan electrified powertrains and vehicles. As well as the new JUKE Hybrid, we will also introduce our boldly innovative e-POWER drivetrain on the Qashqai crossover. We’ve already started taking orders for our new flagship Ariya EV, while the Townstar Light Commercial EV will go on sale later this year. And in the second half of the year, the all-new X-Trail Crossover will also be introduced,” said Coralie Musy.