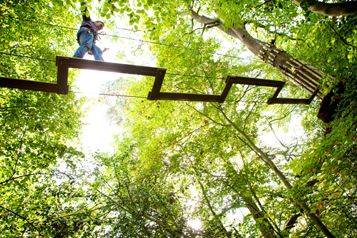 On Friday 29th June, Halesworth based dealership, Hammond Motor Group attended Holton Primary School’s Midsummer Madness fete. The event which was open to the local community, had an array of stalls including; a bouncy castle, face painting, raffle, bbq and numerous other activities. With all of this on site, the team were sure to have a fun filled afternoon.

As part of a recent promotion, Hammond Ford teamed up with Go Ape Thetford. The promotion was exclusive to Hammonds, running throughout June, giving entrants the chance to win two family passes to Go Ape. An incredible outdoor adventure-activity that enables the whole family to explore the forest canopy on a treetop rope course. In order to qualify, customers had to test drive one of three new cars; the all-new Fiesta Active, EcoSport and Kuga.

Hannah Gooda (Marketing Coordinator) and Laura MacAlpine (Marketing Assistant) drove the new EcoSport to the Suffolk school, where the parents and staff were able to get a feel for what the car really had to offer. They were also joined by Go Ape Thetford who brought along one of their Segway’s. This proved very popular with the children, parents and teachers.

The winners of the competition have now been drawn and notified – We hope that they’ll have just as much fun as we did when they’re monkeying around at Go Ape!