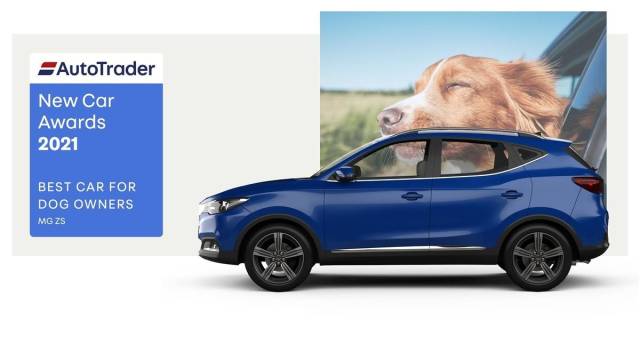 MG has had a strong performance in 2021 as the ZS SUV earns its second top prize in this year’s AutoTrader New Car Awards for Best Car for Dog Owners.

Over a challenging year, our four-legged friends have been great companions, and have given us the motivation to get out of the house for a change of scenery and a breath of fresh air. Now that we’re able to travel a little further and with more households getting dogs, a car that suits this kind of active lifestyle is an important consideration.

The MG ZS takes top prize with its combination of affordability, practicality and no-nonsense outdoorsy spirit.  A priority for dog-owners when buying a new car is the interior space and how easy it is to use. SUV’s are a popular choice, with the Dacia Duster and Toyota RAV4 also a popular choice.

“The luggage space is amazing and dropping the back seats is so easy,” said one owner on the ZS’s versatility. The option of an MG all-electric version is yet another string to the ZS’s bow, too. “Being one of the cheapest EV’s available I’m staggered by the quality, ride, performance, and specification,” said another satisfied customer.