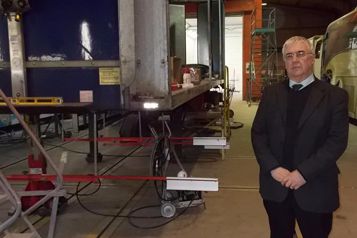 In 1976, Roy was newly married and saving for his first house. His previous employer had always paid him cash but on this occasion he was asked if he would accept a cheque. It bounced, this was the catalyst that drove Roy to seek new employment. That’s when Roy’s fortunes changed.

Whilst filling up with fuel at Hammonds founding site in Wenhaston, he happened to speak with Roy Hammond and was offered a choice of two jobs. The first was to serve petrol, the second was in the stores, Roy chose the stores position.

He worked at AW & D Hammond Ford on Norwich Road Halesworth for 18 years before moving to the Accident Repair Centre at its now current premises on Blyth Road Industrial Estate. He became Assistant Manager, and was later promoted to Admin/IT Manager.

When he first joined, Hammond Motor Group employed 30 people, today the company employs 250. In his 40 years, Roy has witnessed a lot of changes. When he first started, the most popular cars the Accident Repair centre worked on were MG, Triumph, Austin, Mini, Hillman and Singer. He recalls, “When chassis’ had to be straightened, we had to hire brackets that fitted the individual models from the manufacturers and measure them out. Today it is all done with lasers, now you input the dimensions into a computer, set up the jig and you’re all set. Vehicles have also become more complex and safer with the use of new materials such as aluminium, plastics, fibreglass and high strength steel.”

Roy’s future plans include gardening, tending his vegetable plot, dog walking and enjoying the house he built with his wife 30 years ago. He said, “I will miss everybody but will be popping in for a cup of tea and a chat. I have enjoyed working for Derek, Glen and Roy. I owe a lot to Roy.”