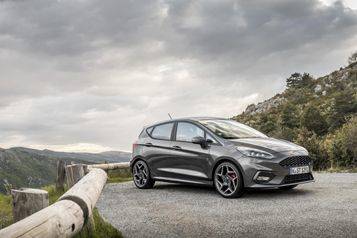 Forget The Heatwave, Awards Are Raining Down On The New Ford Fiesta!

Steve Fowler, Auto Express Editor-In-Chief, said: “The Ford Fiesta’s fantastic mix of affordability, practicality and infotainment is a big draw for buyers, and when combined with attractive PCP finance deals – it’s a winner. Add in the car’s dynamic ability and the Fiesta really cements its position as the king of the supermini class.”

2018 continues to be successful year for this iconic Ford. This is its eighth award which follows ‘Car Of The Year’ and ‘Best Small Car’ by carbuyer.co.uk, sister site to Auto Express.
This year sees more than 50,000 new Fiesta’s hitting British driveways. Consumers praise the car’s value, comfort and ride.

The many safety and driver assist technologies on board have resulted in the Fiesta range receiving the highest five-star Euro NCAP rating ever. Some of which include; lane-keeping alert, seatbelt minder and speed limiter for when inexperienced drivers are behind the wheel.

“As the best-selling car for over 10 years, us Brits have truly taken the Ford Fiesta to our hearts. The pressure was on to deliver a replacement which would continue the Fiesta’s reign – which Ford has done and Auto Express has recognised” commented Andy Barratt, Ford of Britain Chairman and Managing Director.

There’s More To The Fiesta Than You Think.

The Fiesta ST has just landed on our doorstep. This much anticipated hot-hatch is more powerful, more responsive, and more fun to drive than ever before. The introduction of a new 200PS engine and mechanical limited-slip differential, not only enhances traction and control when you need it most, it guarantees to put a smile on your face when driving it.
For the first time, a crossover joins the Fiesta family. The Fiesta Active is equipped with selectable driving modes and rugged SUV-inspired body styling. Bespoke interior finishes, alloys and a raised ride height complete a distinct new look, literally raining the Fiesta above the rest.