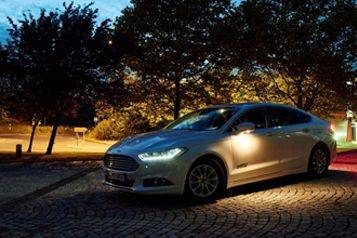 Ford developing advanced headlights that point out people, animals in the dark, and widen beams at tricky junctions.

Driving at night, particularly on unlit roads, can be a nerve-wracking experience. Ford is developing new lighting technologies that will enable drivers to more easily identify potential hazards, including pedestrians, cyclists and animals.

Ford’s Camera-Based Advanced Front Lighting System can widen the beam at junctions and roundabouts to better illuminate hazards that are not in the direction of travel. New Spot Lighting technology helps draw the driver’s attention to pedestrians, cyclists and even large animals in the vehicle’s path or even just off the road.

“Many people who drive at night have had to quickly react to someone or something suddenly appearing in the road – as if from nowhere. Ford’s Camera-Based Advanced Front Lighting System and Spot Lighting help ensure the driver is quickly alerted to people or animals that could present a danger,” said Ken Washington, vice president, Ford Research and Advanced Engineering.

The system also uses GPS information to better illuminate bends and dips on a chosen route. Where GPS information is not available the technology uses a forward-facing video camera mounted in the rear-view mirror base to detect lane markings and predict the road’s curvature, using the information to illuminate the area more effectively.

In a further evolutionary step, in those instances, the camera stores the information in the navigation system. When next the driver uses the same road again, the headlights adapt to the course of the road automatically to better light the way.

Camera-Based Advanced Front Lighting System was developed at Ford’s European Research and Innovation Centre in Aachen, Germany, and Ford expects the technology to be available for customers in the near term.

Spot Lighting – currently in the pre-development phase with Ford engineers in Aachen – uses an infra-red camera in the front grille to simultaneously locate and track up to eight people and bigger animals, including larger dogs, at a range of up to 120 metres.

The system can spotlight two hazards for the driver with a spot and a stripe on the road surface, illuminated by two special LED lamps next to the fog lights. The highlighted objects are displayed on the screen inside the car, marked in a red or yellow frame, according to the proximity of the object and the level of danger presented.

“Camera-Based Advanced Front Lighting can help make it easier for the driver to travel at night in unfamiliar surroundings, and to more easily see unexpected hazards. At roundabouts, for example, our system helps the driver to clearly see the exits – and check if cyclists and pedestrians are crossing the road,” said Michael Koherr, research engineer, Lighting Systems, Ford of Europe. “Spot Lighting makes potential hazards in the road ahead more easily visible to the driver – whether that is a pedestrian, a cyclist, or even a large animal.”

Road safety reports show that on unlit roads there is a significantly increased likelihood of accidents, and that such accidents could involve personal injuries, or fatalities.* Ford is a leading innovator in lighting technology. Systems currently available on Ford vehicles include:

Keep up to date with all the changes in technology HERE