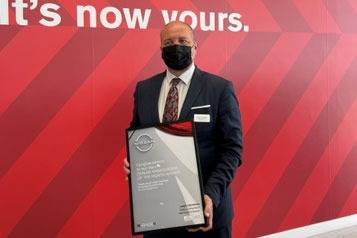 We take great pleasure in announcing that our salesman, Leigh, has won Dealer Ambassador Of The Month.

During the lockdown in January, Leigh was the only Sales Executive not to be furloughed and while this presented him with several opportunities, it also presented him with many challenges. Leigh impressed with how he set to work preparing and delivering orders that had been sold by his other colleagues prior to lockdown.

At the start, Leigh was in an unfamiliar territory, but quickly got to grips with the new click and collect format, at the same time, maintaining the highest possible standards.

The pattern of his high performance and moral continued throughout the quarter and it was because of Leigh’s great attitude and performance that he was able to exceed his targets, as well as performing other tasks that were not his usual area of responsibilities.

It was Leigh’s upbeat attitude and ability to adapt that helped him to deliver such a performance that was above and beyond of what was expected when we first re-entered lockdown in January.