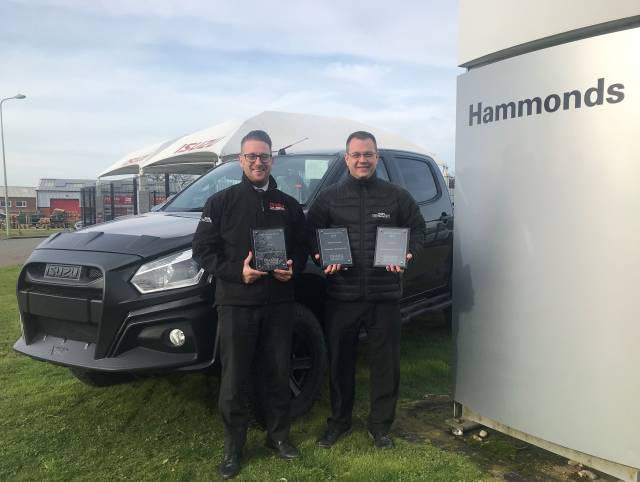 The team at Hammond Isuzu is celebrating after receiving three awards at the recently-held national Isuzu annual conference.

The motor dealer took the top spots in the National Parts Award, for the most parts sold; the Regional Sales Award, for selling the most Isuzu’s in north Suffolk and south Norfolk; and the Highly Commended Award, which is a national award recognised by Isuzu for outstanding customer care.

Andy Hammond, operations manager at Hammond Isuzu, said: “We are extremely proud to have won these awards, this is only made possible because of the hard work that everybody puts in year on year.”

Mark Dorling, sales manager, added: “We won’t be resting on our laurels, we want to continue to be the best at what we do by continuing the great relationships we have with our existing customers and showing our new ones that we’ll be here looking after them long after they have purchased.”

Customers and staff are the ‘driving forces’ behind motor dealer’s successwe have with our existing customers and showing our new ones that we’ll be here looking after them long after they have purchased.”

Hammond Isuzu is part of the Hammond Motor Group, a family-run business since 1962. The company was founded by Roy and Daisy Hammond who started from the village of Wenhaston.

Outgrowing its premises quickly, the company moved to Halesworth, from which the bulk of the business still runs to this day. The company now operates six franchises, two breakdown/recovery sites, two accident repair centres, a trailer repair business, a rental fleet and an HGV workshop.

Derek Hammond, director, concluded: “It’s important to remember that no matter how big or small you are as a business, your customers and your staff are the driving forces. This never changes.”