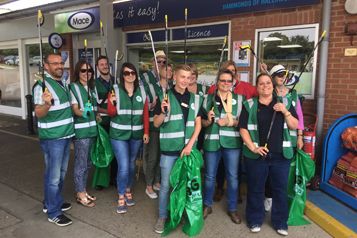 AW & D Hammond clean up the streets of Halesworth

Taking to the streets of Halesworth, the group focused their efforts on the children's play park.

Louise explained, ‘We have a three pronged approach to our community engagement: joining in by doing positive things within the community, doing some good by helping local charities and initiatives, and looking after the individual members of the community who rely on us.’

Hammond’s Jet garage and Mace Express store remains at the heart of the local community supporting Edgar Sewter Primary School, Edgar Sewter Playgroup, Halesworth Men’s Shed and the Guide Dogs. They also run a monthly carrier bag scheme, where all money received goes to a charity of the public’s choice.