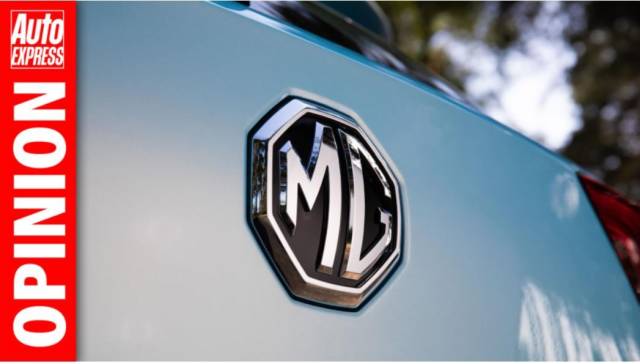 'MG has beaten rivals to the punch, selling electric cars to buyers on £25k budgets'

But at the same time, the Midlander is as tough as Tyson. Understandably so. Various natural or adoptive parents and guardians – including British Leyland, British Aerospace, BMW, the Phoenix mob, MG Rover Group and Nanjing Automobile – left MG bullied, bruised or battered over decades past.

'If you like driving as we do, you’ll love driving an electric car'

Now 95 years young, the once-unloved child finally seems content with SAIC as its wealthy, distant daddy. MG is at last able to enjoy life – and as a record-breaking world-beater, no less. Allegedly superior rival companies who are struggling to sell cars this year now look at the firm with envy, bewilderment and admiration. Really? Yes, really.

In the first half of 2020, overall new car sales in Britain declined by 49 per cent compared with the first six months of 2019. Yet MG registrations rose by 23 per cent. Astonishingly, it’s the only mainstream company to show a half-yearly hike in 2020.

More impressively, in June 2020 (vs June 2019) the market fell 35 per cent, but MG rose by 88 per cent, making it the fastest-growing automotive brand. The firm is also on course to sell more cars in pandemic-stricken 2020 than in pandemic-free 2019. Astonishing.

Cynics say MG’s colossal success is down to mega production volumes, economies of scale, inexpensive old tech, plus products that are cheap ‘n’ nasty in terms of design, build and finish. But nothing could be further from the truth. While Audi’s, BMW’s and Mercs are now so common that at least one sits in almost every street, MGs are far more rare – and therefore more exclusive! And while those three brands beat the humble England-based firm for overall quality, desirability, interiors and more, some German exteriors have looked slightly iffy recently, whereas the latest MG designs from Carl Gotham’s London studio are beyond budget-brand standards.

The range starts at £12k, and ends at around £30k for a top-spec MG EV. But Longbridge-engineered MGs are inexpensive, not cheap; closer to nice than nasty; built and priced to sell instead of being overproduced/overpriced, and left to languish in compounds.

The firm has beaten many of its rivals to the punch by successfully selling pure-electric cars to buyers with budgets of around £25k. But this is just one reason for MG’s industry-leading rise. Also offered to customers are free charging cables/home charger units/EV servicing packages, up to £2,500 deposit contributions, reasonable (4.9 per cent) interest rates, plus Kia-like seven-year warranties. Importantly, swappage not scrappage is MG’s latest message; up to £7,280 off a brand-new model is promised. How good is all that?

The company is clearly giving its rivals brutal lessons in pricing and selling. Look, listen, learn and copy is my advice to them. More than ever, value for money is the No. 1 priority for real-world motorists with ever-decreasing disposable incomes. World-beater MG has already sussed this. I’m staggered other, allegedly smarter, makers haven’t done the same.