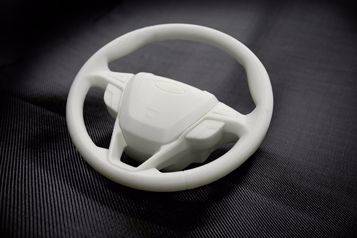 Here’s the best reason to add a 3D printer to your Christmas list:  the technology can now be used at home to print models of some of Ford’s most desirable cars, including the all-new Ford GT, Ford Mustang, and Focus RS.

Ford uses 3D printing to reduce development time through the production of prototype parts that enable designers and engineers to quickly test and refine different approaches. Traditional prototyping methods require special tools and can be time‑consuming. Ford can print a 3D part in a few hours and, for as little as £750, open up the opportunity for more experimentation and more radical, innovative design.

“3D computer printing technology has totally changed the way we design and develop new vehicles. We can be more creative in trying to find potential solutions, and for the customer this means that our cars are better able to incorporate the latest thinking in design and technology,” said Sandro Piroddi, Ford of Europe’s Rapid Technology supervisor.

Ford bought the third 3D printing machine ever produced in 1988, and has since produced its 500,000th 3D printed part globally - an engine cover for the all-new Ford Mustang. Today’s printers are quicker, more cost efficient, and incredibly accurate and can be used to produce prototypes for a wide variety of parts.

“Incredible as it is that 3D printing has been around for more than 25 years, it is a technology that is moving more quickly than ever before, opening up new ways of manufacturing the cars of the future,” Piroddi said.