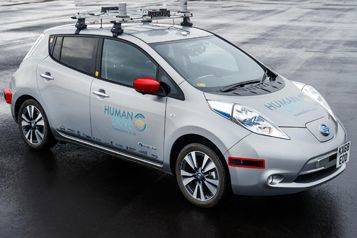 Nadhim Zahawi, Business Minister said “Safely completing the longest autonomous drive in Britain is an incredible achievement for Nissan and the HumanDrive consortium, and a huge step towards the rollout of driverless cars on UK streets.”

The car was fitted with GPS, radar, LIDAR and cameras, meaning its advanced technology allowed it to assess its surroundings and make important navigation decisions whilst on the road. Nadhim continued, “This project is a shining example of how the automotive industry, working with government, can drive forward technology to benefit people’s mobility - while helping to slash carbon emissions.”

During its journey, it travelled on a range of roads including the M1 and country lanes. The autonomous technology was activated every time the car needed to start, stop and change lane. For the whole duration of the journey, two engineers remained in the car and took over briefly when the car pulled into service stations for routine checks. This aided the car in achieving its target of 99% self-navigation.

Bob Bateman, the project manager for Nissan’s Europe technical centre, commented: “The HumanDrive project allowed us to develop an autonomous vehicle that can tackle challenges encountered on UK roads that are unique to this part of the world, such as complex roundabouts and high-speed country lanes with no road markings, white lines or kerbs.”

Pop into to Hammond Nissan in Bury St Edmunds and Halesworth in Suffolk (close to the Norfolk border) and try one for yourself. Unfortunately, you’ll have to drive it yourself for now.

Isuzu has updated the D-Max Pick Up, now it has more equipment, improved…

We take great pleasure in announcing that our salesman, Leigh, has won Dealer…