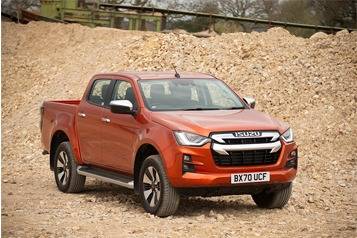 Isuzu has updated the D-Max Pick Up, now it has more equipment, improved technology, increased safety as well as a new refreshed look. With a 30mm increase in the wheelbase, the D-Max can now provide improved in-cab space, particularly, the rear. Although the cab is longer and the pick-up is slightly extended, the D-Max is shorter overall, as the more vertical front end and the higher bonnet of 30mm have reduced the front overhang.

With three distinct pick-up lines – Utility, All Purpose and Adventure, they all benefit from a host of ADAS systems that have contributed to the five-star Euro NCAP rating. ADAS (Advanced Driver Assist Systems) are now standard on all models, this includes features such as:

For the first time in the pick-up line, introducing a wide range of ADAS features that are now fitted as standard include:

The All-New D-Max is the first pick-up truck to achieve all five stars, scoring maximum points for rescue and extraction thanks to the new advanced E-Call System*.

The in-cab equipment is generous, even at all levels and, despite a predicted move up market, the company promises to remain true to the working truck roots.

*The E-Call system is a safety feature that is built in as standard. It’s a simple piece of technology but has been claimed to reduce emergency service response time by 50% in the countryside and 60% in built up areas. The feature works by sending your location, time, what vehicle you’re in and what fuel you take to the authorities while you can use the microphone to talk to the handlers when activated by collision that triggers the airbags.