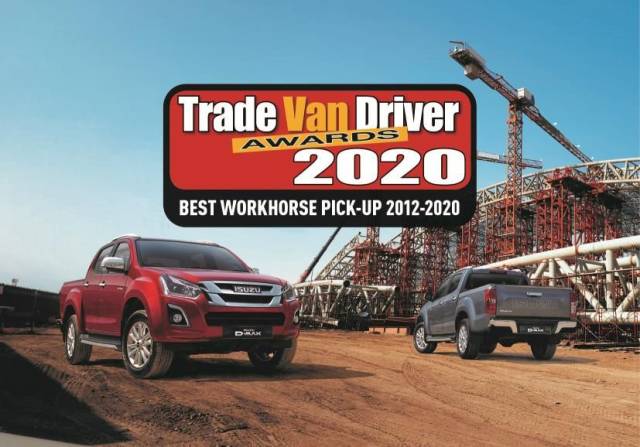 Isuzu do it for the eighth consecutive time!

Continuing a successful 2020, the multi award-winning Isuzu D-Max picks up yet another award. This time it has been recognised as the Best Workhorse Pick-Up 2020 by Trade Van Driver and, in fact, this is the 8th year in a row that the Isuzu D-Max has won this award!

Trade Van Driver is the only magazine which caters for the owner-driver and small fleet operator and as such its awards are different from others as they are judged not only by the expert panel of journalists at the magazine but also by a panel of readers who use light commercial vehicles as part of their businesses.

The Trade Van Driver Awards celebrate the most reliable, capable and truly effective working vehicles available on the market. Vehicles are compared across several core criteria, including payload, safety, technology, running costs, fuel efficiency, reliability and aftersales service so it is a great accolade that, yet again the Isuzu D-Max emerged victorious, beating strong competition from rivals in the highly contested pick-up sector.

Trade van Driver said of the win: “There may be a host of 4x4 rivals stacked up against it offering all kinds of luxuries, but for traders who are strapped for cash yet need a rock-solid, reliable off-roader, the D-Max ideally fits the bill. It’s strong, practical and built to last yet it won’t break the bank buying it. A worthy winner for the eighth year running in the view of the judges”.

The Isuzu D-Max was praised for meeting Euro 6 standards without the need for AdBlue, unlike most of its competitors. It has a 3.5 tonne towing capacity, over 1 tonne payload and provides a quiet, economical driving experience. The breadth of the Isuzu D-Max range also impressed; with single, extended and double-cab formats available, as well as a wide choice of trim levels. Coupled with the attractive five-year/125,000-mile warranty package and 5 years’ roadside assistance (in the UK & Europe), the Isuzu D-Max proved it was truly built for the professionals who use it.

William Brown, Isuzu UK Managing Director, commented: “We’re really proud to receive this award as it acknowledges that the D-Max’s capability, practicality and reliability meet the needs of our customers. It’s really pleasing that all the hard work that has gone in at Isuzu to make such a great product has been recognised, especially as the judging panel consisted of industry experts and professional pickup drivers alike.”

The award-winning Isuzu D-Max has already had a successful start to the year after being crowned ‘Pick-Up of The Year’ at the 2020 WhatVan? Awards. The Isuzu D-Max XTR then won ‘Best Off-Road’ and the Huntsman tracked down ‘Best Model’ in the 4x4 Magazine awards for 2020. This success follows on from 2019 where an impressive eight awards were won by the Isuzu D-Max. It just keeps picking them up!