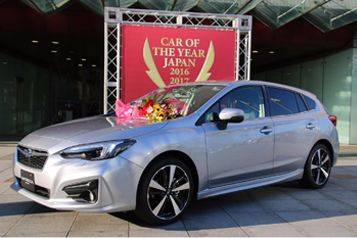 Subaru are pleased to announce that the all-new Impreza has been named 2016–2017 Car of the Year Japan. This is the second-time Subaru has been awarded the honour, following the Legacy’s win in 2003.

Based on the Subaru Global Platform, the all-new Subaru Impreza aims to offer the utmost “Enjoyment and Peace of Mind” driving experience to all drivers and passengers, with an array of new technologies that greatly enhance all-around safety as well as dynamic and static quality feel. It is the first car ever produced by a Japanese brand to include a pedestrian protection airbag as standard on Japanese market models.

In about a month since its launch on October 13 in Japan, the new Impreza outsold its monthly sales target of 2,500 units by more than fourfold, with 11,050 orders. Demand from customers switching from other brands has been especially notable, representing 51% of all orders and indicating that new Impreza is attracting an ever-wider range of customers in Japan.

“It is a great honour that the Impreza has been recognised with this distinctive award,” said Yasuyuki Yoshinaga, president and CEO of Fuji Heavy Industries. “I would like to thank our customers, suppliers and shareholders for their continued support for Subaru and I am grateful to all those who contributed to this achievement. We will continue to enhance our efforts to offer an ‘enjoyment and peace of mind’ driving experience to all customers.”